The Story that Became the Vision

This is my short story. Albeit with some reluctance, I think it’s a good time for me to share about the underlying drive for me all these years - doing what I’ve been doing, coming to where things are right now.

I share this as a founder of Heartzmail, for our present and future customers, co-workers and investors who will come to be a part of our journey.

At the time of this writing, we’re just about to launch the latest, version 2 of Headquarter, powered by Heartzmail - a product that centralises all the tools that raise the game for sales and marketing people to connect with their marketplace and customers in a deeper way. A product that is created to bring people closer to each other.

My story goes back quite a long way as I reflect.

I started making things since a little kid. There weren’t much toys around me so I had made a habit of dreaming and making up whatever fancied my imagination.

From the window of my house on the 8th storey at Blk 1 Tew Chew Street (where Clark Quay MRT is today), I would regularly look down at the rubbish dump like a spy. A rich kid whose father owns a shop across the street would sometimes throw his unwanted toys there and I would quickly rush down and pick them up after he left. It became boring after a while because those toys were not much fun. So my imagination became rather busy.

In full abundance around my block were discarded wooden crates and anything that looked like raw material to me would soon become a part of my toy. So I made rockets out of matches, wooden rifles with paper bullets and soon started thinking about designing and making a life sized robot, made of wood, etc. That I gave up after a while. I was too small.

Once, I fancied making the smallest, most compact paper bullet that I could shoot at someone’s face with a rubber band in the middle of a boring class. You see, I’ve believed as young as I was that an imagination, a vision should be brought to life. Yea, most classes bored the hell out of me and I was a lucky prankster that wasn’t kicked out of school.

Just before I was enlisted into the Army however, I handmade 3 ovation-styled guitars. Mom had thought that it was better for me to turn our little 4 room flat into a workshop (with wood and fibreglass dusts everywhere) than to risk me spending time with bad companies and become a triad gang member. It was a very rowdy and rough neighbourhood I grew up in. While having to work two jobs, she gave me money to buy some tools. 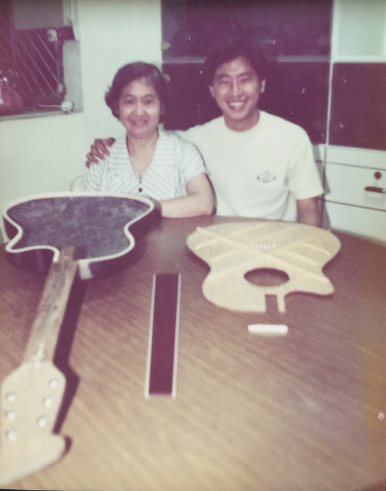 The first guitar - it took 2 months and a knee I almost lost when a 20,000 rpm power tool blade hit a nail in the wood, bounced back and went into my knee cap. The guitar was made with a few power tools together with an old stool and our dinning table. No specialised gigs and fixtures whatsoever.

The miracle that my knee cap wasn’t split in half still baffles me till today, but work continued immediately after I got back from the A&E department. 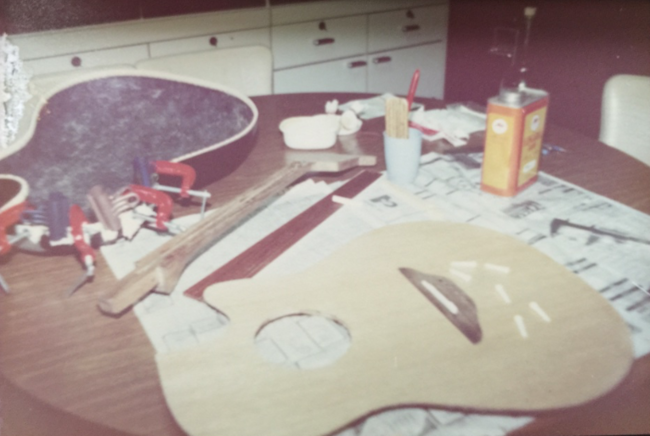 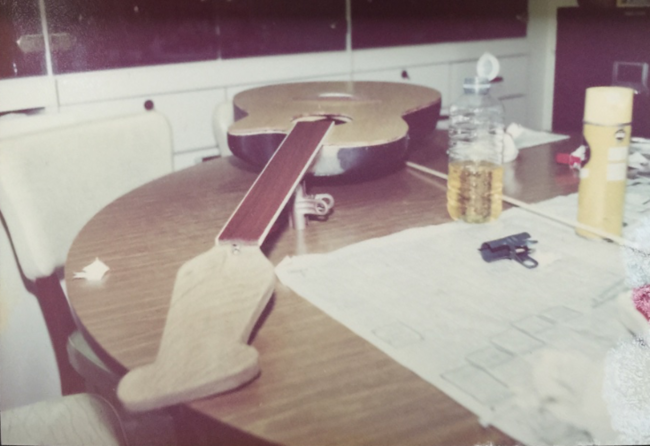 I learned later from a Yamaha guitar salesman that he’d only known of another person who has done that before in Singapore quite a while before me. That was a gratifying knowledge for me. The 3rd one I made was a 100% fibreglass guitar - something I don’t think anyone has made before. But it broke like glass when I accidentally dropped it in my army camp bunk one night. You see, it wasn’t put together with industrial strength glue.

I still keep the first guitar, albeit in a rather broken state right now.

I keep it to serve as a reminder to myself - that through grit and determination, it’s possible to make things that are very difficult, even when no one has done or thought of it before, there I must not be afraid to thread.

When I told my friends that I was going to make a guitar, everyone thought I was nuts.

As time would have it, I left after 2 years to start selling the IWS to more people. One of my user and also a close friend asked me, “you’d be a very successful agent if you used the software for yourself. Why do you want to sell it and deal with all these troubles and difficulties as a businessman?”

That was the defining question that got me to pause and think about what I was really doing. What drove and motivated me. I wrote the software because I wanted to change the way agents did their business. I wanted the clients to be better served. That’s what kept me programming 18 to 20 hours a day for coming to 2 years, until I saw the working product.

So I did a little math that took a few seconds. If I used this technology just for myself, I would have benefited about 300 to 500 of my own clients. But if I can sell this to 1,000 agents (the more the merrier of course), then I would have benefited 1,000 x 300 people out there. It was a no brainer. That was a much happier thought.

Today, this is still a very happy “Peter Pan” thought as much as it was back then. To be able to bring people closer to each other with our product gives me that feeling that money simply cannot buy.

Make to improve the lives of the masses the world over. This is my vision. It’s the very reason Heartzmail was created, that after 3 years has now led to the creation of Headquarter.

The launch of Headquarter is an important milestone. Not only is this tool created for the insurance industry, it’s also a tool that is created for all sales and marketing professionals in any industry. Some of the functions in HQ are perhaps the first of its kind in the way it’s implemented and took a few years to materialise.

Until today, the vision and drive is still the same. This should never change.

Vision and mission statements are words that people don’t seems to read these days.

The story that become the vision however, is the very lifeblood of this initiative and company and this is what I want to share with those who will join us in our journey.

Here are the steps to take to get your batch of Christmas cards prepared for sending. Write to samuel@heartzmail.com. Indicate your preferred design (A, B or C) Sign in to your heartzmail account. In the Activities page, tick under the... Continue →